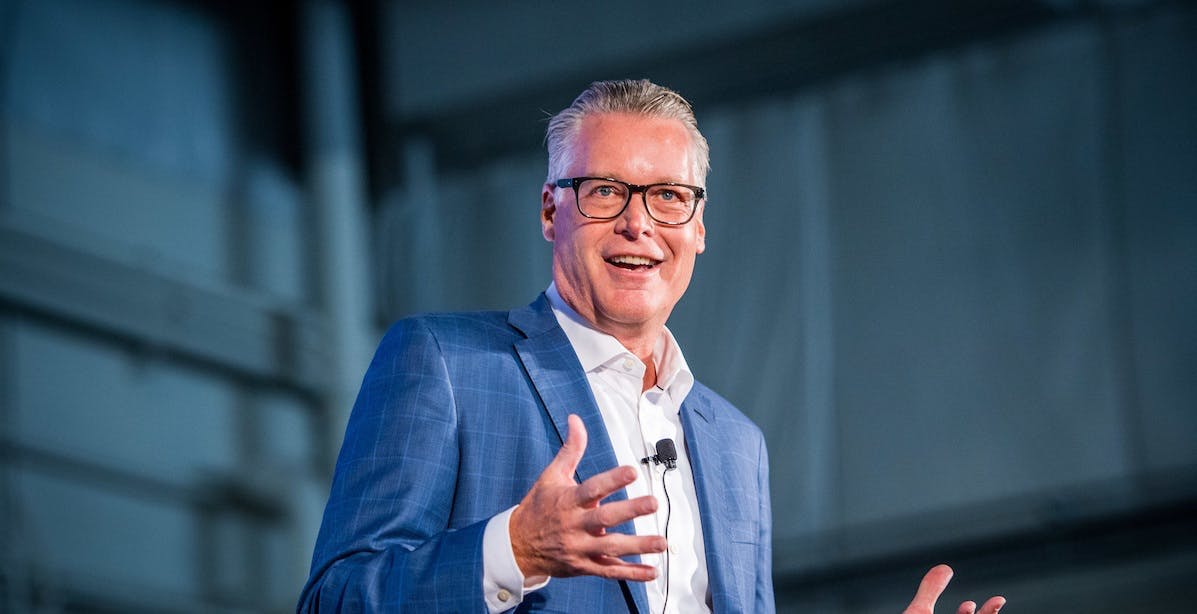 The appearance of an airline CEO as a primary keynote speaker at the Consumer Electronics Show is indication enough of the recognition that aviation, after years of lagging, is experiencing a “moment” of technological advancement.

In his one hour-plus CES keynote, Delta Air Lines CEO Ed Bastian sought to position the airline at the forefront of a range of technological change in aviation. In a presentation that was part TED Talk part/part Steve Jobs-inspired product preview, Bastian previewed several examples of how Delta plans its part to enhance air travel from the airport and the in-flight experiences to the post-flight “multi-modal” aspects of getting to a destination. In addition, Bastian also demonstrated how Delta’s technology would reach into maintenance assistance for cargo and freight employees.

Why Is An Airline Exec At CES?

Some of it was quite heady and seemingly futuristic, such as the use of antimicrobial lighting and the Minority Report-like digital display billboards in airports that present personalized messages/ads to individuals walking by (anticipating the creepy movie references, Bastian stressed the “Parallel Reality” program in partnership with optical design engineering firm Misapplied Sciences would be opt-in).

And while the improved Fly Delta mobile app is being reconceived as a broader “virtual concierge” with enhanced bag tracking (and even the ability to arrange bag delivery from the airport to a hotel), many observers on Twitter expressed disappointment that free in-flight wifi for all passengers would still take years. (Perhaps to assuage some passengers about the lack of total wifi access, Bastian did note that progress is being made on the ability to connect in-flight entertainment with Bluetooth headphones.)

But for Delta, and for airlines in general, CES’ granting of such a high-profile speaking position is validation for the leaps that commercial aviation has made in the last few years. Certainly, American Airlines appeared to time its own latest in a series of tech news announcements for Bastian’s big moment by introducing its offering of Google Assistant voice-activated “interpreter” at airport lounges, starting at Los Angeles International Airport (LAX).

Nevertheless, Bastian also sought to pre-empt any doubts about airlines’ ability to be regarded as forward-looking from the moment he took the stage (which was briefly delayed by some technical issues).

“What is an airline executive doing coming to CES?” Gary Shapiro, president and CEO of CES, played asked as Bastian walked out.

“You do ask a great question, Gary,” Bastian responded. “To answer that question, you have to look back more than a century, when technological innovation brought the life changing magic of powered flight to our world. We’re here today because we still think that the gift of flight is the ultimate innovation. It allows people to connect across vast distances. It opens up opportunities that simply aren’t possible without a human connection, and it brings the world closer at a time we need to be closer more than ever before.”

Aiming At Stress, Not “Shiny Objects”

While Bastian probably didn’t need to assure the CES audience that Delta isn’t in “the business of chasing shiny objects or technology for the sake of being cool,” he did try to lay out a set of principles behind its approach to updating the airline’s tech capabilities.

“At Delta, our focus is on applied innovation and we’re dedicated to solving your travel problems, and making your journeys and your lives easier and less stressful,” Bastian said. “At Delta, we have a vision for getting there. So today you’re going to see what travel will look like in 2025 and the steps that Delta is taking to bring it to life.”

Clearly, Delta’s tech focus as presented at CES was on reducing or eliminating the stress of flying. Whether it’s traveling with a pet or ensuring the care of an unattended child, to providing wider in-flight amenities, to getting in and out of the airport as efficiently as possible, that’s how Bastian views technological achievement.

Lastly, he also sought to drive home the point of environmental sustainability by eliminating single-use plastics, “recycling an amount of material equal to seven Airbus A350s,” while promising to cut total fuel emissions in half by 2050.

“The past five years, we’ve invested billions to turn Delta’s technology from what had been a vulnerability to an award-winning digital advantage,” he said. “And what has that done? It has given us tools, like real-time bag tracking, biometrics for faster boarding and shorter lines, and we get a lot of fresh ideas through partnerships with entrepreneurs and with startups. You’re going to be seeing some of that today. We’re working with startups who are pushing the envelope, like CarePod, where they’re working to carry and monitor our pets safely and humanely from gate to gate.

“We’re also exploring a new way to keep airplane cabins clean with a startup called Vital Vio, which make antimicrobial lights that safely and constantly sanitize surfaces without impacting people,” Bastian continued in his opening remarks. “We’re recycling plastic waste into the blankets that we have on board.”

As for a breakdown of the specific announcements Bastian detailed at CES:

Parallel Reality: At first glance, Delta’s collaboration with Misapplied Sciences to show “personalized content” to travelers making their way through airports seems like a tough sell in this age of privacy/targeting wariness. But the promise to show only tailored messages to those individual travelers who opt-in could blunt most people’s fears.

The display technology, dubbed Parallel Reality, will begin beta testing for customers departing Detroit Metropolitan Airport this year. Delta calls it “the first step toward a future where the airport environment itself is tailored to each customer.”

At least at the outset, the technology will provide wayfinding and personalized travel info, such as directions to a traveler’s departure gate, or the closest Delta Sky Club.

For the beta experience in Detroit, nearly 100 customers will be able to simultaneously view personalized content tailored to their individual travel on a single large-scale digital screen located just after security. “Customer and employee feedback from this opt-in trial will be critical to shaping the future experience,” Delta states.

Delta Concierge: The idea of envisioning an airline’s mobile app as something more than just a place to store a virtual boarding pass is something most airlines are pursuing. Still, most think of it as a way to order food or track bags more easily. For the Fly Delta app, Bastian outlined the short-term of goal of offering a true “digital concierge that anticipates customer needs, offers convenient services like a ride to the airport and delivers thoughtful notifications, keeping customers moving seamlessly on their journey.”

“Customers tell us they want Fly Delta to become their ‘home base’ for managing their travel day,” Bastian said. “That’s why we’re evolving the app to become the ultimate travel companion for all points of your journey – with an eye on expanding the convenience and value of using miles as a form of payment for services with Delta and partners, throughout.”

Among the first step of building out Delta’s vision of a digital concierge involves a deeper partnership with ride-hailing service Lyft. By offering fliers multiple points within the Fly Delta app to link Delta SkyMiles and Lyft accounts “will make it easier for customers to earn miles during Lyft rides,” Bastian said.

Other features being explored include providing estimated arrival times powered by Lyft, testing a dedicated premium Delta-Lyft experience at some of the busiest U.S. airports, and offering the option to pay for rides using miles.

“Lyft and Delta share a commitment to bring hospitality and innovation to our communities,” said John Zimmer, co-founder and president of Lyft, who appeared on stage with Bastian at CES. “That is why today we’re excited to expand our partnership and progress toward our goal of transforming the industry with the world’s best transportation.”

The next step in Delta’s virtual concierge plan comes later this month, when virtual queuing launches in Fly Delta to notify customers when their seat – not just their flight – is boarding. This adds to recent upgrades like integrating TSA wait times in select markets, offering pre-select meals and international auto-check-in – all designed to make travel more personal.

“Instead of checking one app for traffic, another for airport parking and a third for TSA wait times, Delta is building the capability to simplify travel by helping you manage everything from ridesharing and in-flight entertainment to bag delivery and hotels,” Bastian said. “We’re excited to start exploring these possibilities with an innovative leader like Lyft, with whom we share a passion for making the customer travel experience even more rewarding.”

AI, Machine Learning, and The Weather: Delta is unveiling a “full-scale digital simulation environment” for its global operations that is designed to provide better alerts to pilots and passengers about the expectation and duration of turbulence and other issues that cause flight delays (i.e., stress).

It’s also a “post-mortem tool that can be used to identify how better decisions could have been deployed in a given situation.”

“Another focus we have is on turbulence,” Bastian told the audience. “We are seeing more and more instances of it. It has a very real impact on our customers and on our employees. As Sandy mentioned earlier, we have been able to reduce the impact of turbulence with the Flight Weather Viewer, which is an app developed by our very own Delta pilots. It visualizes turbulence and other weather hazards along the flight path. Using it, pilots can adjust their course more precisely, increasing CO2 emission by 10s of thousands of metric tons a year, and it also helps our pilots give real time updates to travelers while they’re in the air, in advance of encountering turbulence, and they can also let them know how long we expect it to last. Having that information to our customers is another way that we can reduce stress.”

Delta will launch its initial live implementation this spring. The tool is expected to continually become more effective over time, as more data is collected and integrated.

The Robots Are Here: And they’re not coming for anyone’s jobs; instead, the Sarcos Guardian XO, a battery-powered, full-body exoskeleton designed to boost human performance and endurance while helping to prevent injury, is intended to turn Delta employees into superhero-strong staffers.

This robotic suit, designed by exoskeleton maker Sarcos for employees to wear, does the heavy lifting. By bearing the weight of the suit payload, the exoskeleton may enable an employee to lift up to 200 pounds repeatedly for up to eight hours at a time without strain or fatigue. And, as Bastian and a Delta employee named Fletcher demonstrated, it also enables dancing. (Perhaps wisely on Bastian’s part, he avoided an Elon Musk dance challenge during the presentation.)

“Because we carry 200 million people across the world every year, the opportunity for our innovations to have meaningful impact is tremendous,” Bastian said in an early summary. We engage with 600 thousand customers every 15 minutes. That’s the population of Vancouver every hour. So when we envision what the future of air travel looks like, we have to think big. Start small, and then scale very fast. The opportunities to better connect people across the world are truly endless, and technology will help us do it even better.” 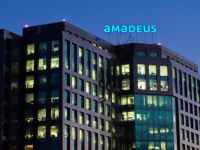 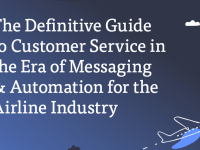 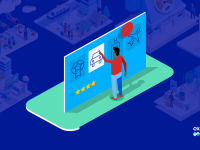